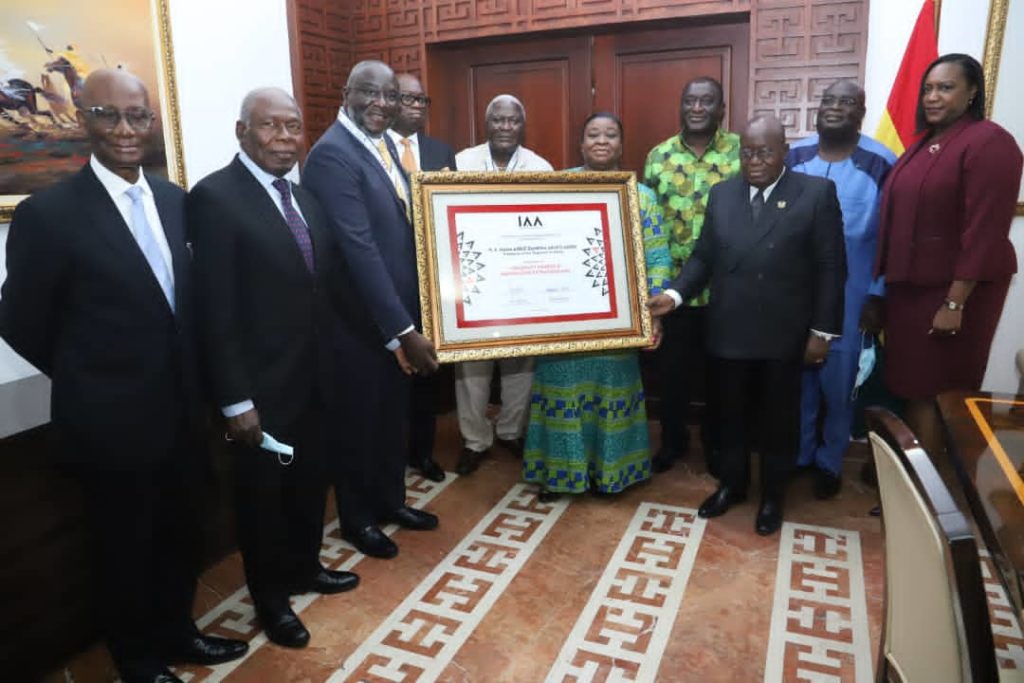 Mr. Joel Nettey is the newly-elected Chairman and World President of the International Advertising Association. He is the first African to lead the 82-years-old association which has membership in over 40 countries.

President Akufo Addo commended Mr. Joel Nettey for bringing honour to the Republic of Ghana by being the first African to be elected as the IAA President. The President of the Republic of Ghana, in his speech, during the meeting, stated the need for the country to do something about projecting itself. He mentioned that in the country’s effort of projecting itself, it should not do so by just in the term of one President, but it must be a country-focused effort and that it is something that all must put heads together and make it work. He assured the association of the government’s assistance to champion the World Marketing Day since it would be of immense benefit by bringing dividends to the government and the people of Ghana.

The AAG also conferred on President Akufo-Addo the titles of an Honorary Member and Ambassador Extraordinaire of the Association, the first to be bestowed on any individual.

The Minister of Trade and Industry, Mr. Alan Kyeremanten, indicated how Mr. Nettey’s promotion is a result of the hard work he had put in both home and abroad as well as President Akufo Addo’s achievements for the country around the globe. He gave utterance to the fact that the government is in support of the Advertisers Bill because President Akufo-Addo considered the private sector to be the anchor that tied up the structural transformation of the economy. He continued that Parliament would support the establishment of an advertiser’s council to regulate the advertising and marketing community space. Speaking about the African Continental Free Trade Area (AfCFTA), the Honourable Minister mentioned that Ghana was keen on benchmarking itself not only within Africa but globally.

Mr. Joel Nettey applauded President Akufo-Addo for bringing the AfCFTA Secretariat to Accra and successfully organizing ‘The Year of Return’. He stated how these two major initiatives of the President have made him a great brand ambassador for the country. He however observed that various governments who assume power in the country should collaborate with associations to assist in building a national brand. He stated the need for Ghana to sustain a solid national brand given the immense benefits it can give to the country. Mr. Nettey mentioned that all the countries that had been well branded went through various methodologies to achieve their goals, and suggested that a Brand Ghana Office be set up by an Act of Parliament with a dedicated source funding.

Mr. Francis Dadzie, the Executive Director of AAG, said the association had made every effort to regulate the industry since 2010 because all over the world, there is an advertising council established to regulate the industry in every country. He said the association, through the Ministry of Trade and Industry, supported the Advertising Industry Bill to Parliament and got the first reading in 2016 but the process got truncated. He expressed the hope however that, the bill would resurface.